4 / Do you play the victim, the villain, or the hero at work? 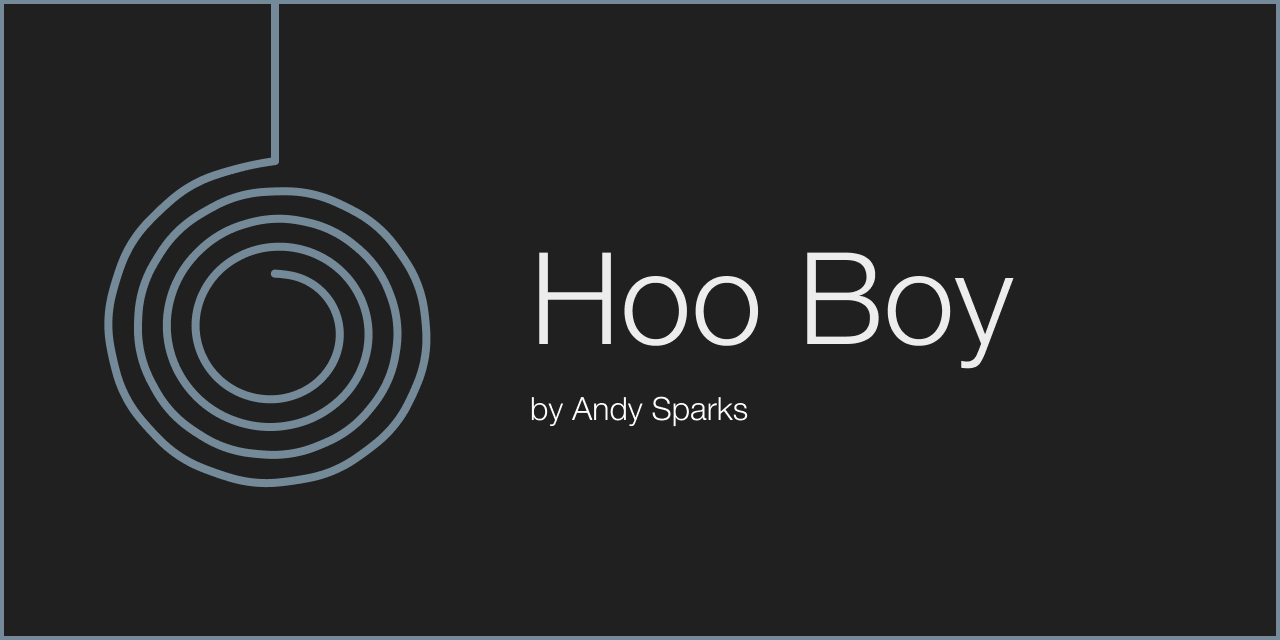 In the last edition of Hoo Boy, I wrote about how people make up stories in their heads and trick themselves into thinking they’re facts. My example of a fact being that I hit you in the face with a water balloon, and a story is that I did it on purpose. The truth is, I’m a lousy pitcher, and water balloons don’t make for the most tossable form factor with their being liquid barely contained in a balloon and all.

I’m excited to build on the theme this week and go deeper into how we construct stories or “fairy tales” as I introduce one of my favorite concepts, “The Drama Triangle.”

Just before that, one bit of housekeeping: a new archive page with web versions of every edition of Hoo Boy is up in case you’d like to browse previous editions. 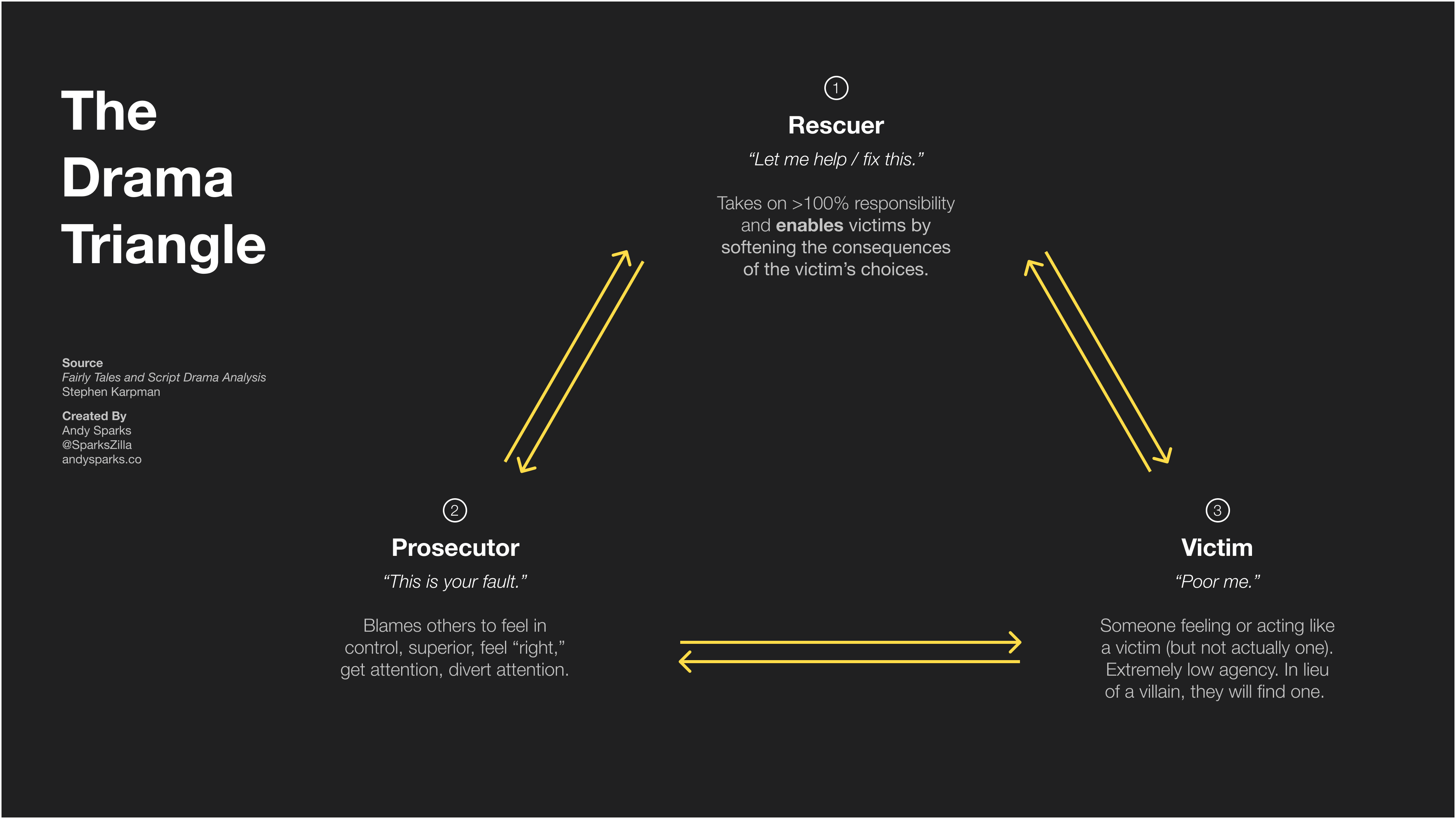 Hopefully, I’ve established that it’s called a triangle because three people are involved. But why a drama triangle? Also simple: the three (or more) people involved unconsciously begin playing one of three dramatic roles: The Victim, The Rescuer, or The Prosecutor. Why do they do this, you ask? We try to alleviate our unpleasant feelings when something isn’t going our way. To do so, we oversimplify the world, create a “story in our head,” and begin to act that story out as if it were a fairy tale.

One important note is that these roles are situational, and people can switch roles inside a situation or relationship. People aren’t “rescuers” every morning they wake up the way they may be an ISTJ on the Myers-Briggs, but they can take on the role of a rescuer inside of one meeting, a Victim in another, and none of these roles in other situations.

In my experience, many founders tend to take on the “the rescuer” role more than others (also referred to as “the hero.”) Rescuers’ primary activity is “fixing” other people’s problems and ignoring or avoiding their unpleasant feelings and problems. One fascinating nuance of Rescuers is that their efforts to “help” often end up doing more harm than good. They hope to help but make you a victim when they micromanage.

Prosecutors are all about dishing out blame and finding fault in others. Prosecutors are often motivated by nasty stuff like feeling superior (”I’m not to blame, you are”) and diverting attention (”He failed… don’t look at my project”).

If Rescuers fix and Prosecutors blame, Victims complain. Karpman wasn’t using the word “victim” to describe people who had legitimate grievances as a result of being harmed by other people. These folks act like a victim, an important distinction. They feel disempowered; someone did something to them.

The first step to getting out of Drama Triangles is to noticing them and how abundant they are. So what do these look like in real life?

One of my favorite triangles goes something like this.

A CEO comes to a session upset that “the engineers” have been spending time “refactoring the site” and other phrases that all translate to “stuff I believe is a waste of time.” The CEO is the classic Prosecutor here. When the CEO brought this up with the head of engineering, they, playing the Victim, said, “We’re waiting for Product to finish another spec, so we didn’t have anything to do.” And instead of admitting they need to redesign the R&D teams to better work together, the CEO switches roles to that of The Rescuer by leaving the meeting, opening up a product spec, plowing through two hours over an extra coffee that night, and finishing the spec without talking to the product team.

Here are a few more fun ones:

Once you notice the roles you and others take on, and I promise you will, you’ll be able to move out of habitual unconscious reactions into a more resourceful mindset where you can choose how you want to respond.

Karpman’s Drama Triangle is now such a popular concept in management and psychotherapy that it’s spawned many “solutions” to the drama triangle that suggest how to shift out of the chaos of drama into a frankly, “less shit,” way of being and working with people. Despite having a bruiser of a website (930px of white space anyone?), author David Emerald’s book, The Power of TED, offers an alternative triangle. Instead of rescuing, coach—help them come up with their own solution. Instead of prosecuting, challenge—encourage them to understand the consequences. Finally, instead of being a victim, create solutions—do your best to solve the problem and take responsibility for your part.

The Insider’s Guide to Data Rooms

Justine Moore at A16Z published a guide for early-stage startups on data rooms: what are they, what should be in them, why are they important? What’s inside: a nice bulleted list of what to include with weirdly pretty example graphics for things like a P&L, use growth and retention charts, and… no ads!

As more and more companies turn to off-sites as a tool for connecting IRL now that remote has become normalized, a lot of folks are asking, “How do we run an off-site?” Maven CEO and Udemy co-founder Gagan Biyani shared a thread this week on how they run theirs. My biggest takeaway? 50% of the off-site should be devoted to fun.

The Nature of Product

Last edition’s featured book was Inspired by Marty Cagan. And the Monday after publishing, Lenny Rachitsky at Lenny’s Newsletter interviewed Marty on his Podcast. It was a phenomenal conversation. If you’re a CEO, engineer, product manager, CTO, or are in any way, shape, or form involved in product, WATCH THIS. Takeaway? You’ll learn whether you’re running a “feature factory” (ew) or a “product team.”

How Emotions Are Made

Did you know there’s no such thing as “universal expressions of emotions?” Did you know the amygdala doesn’t “hijack” some “rational part” of your brain? Did you know the Triune Brain—the idea your “reptilian,” “limbic” and “neo-cortex” evolved like new layers of an onion over time—is bullshit? So what are emotions? They’re “weather patterns” you experience as your brain makes sense of information coming from your body and the world. 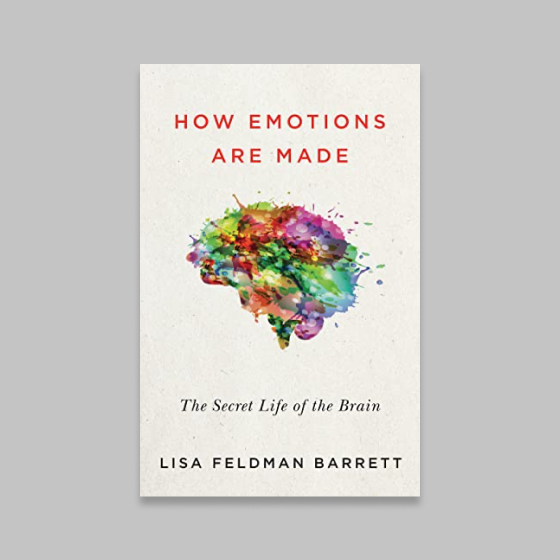 This concept is a bit buried in the article linked here, but just do CMD+F for “absolute,” and you’ll find it. This is something I’ve talked with probably every single founder I work with about giving what Matt Mochary calls “Absolute Feedback.” The idea is this: when you give feedback (ideally weekly), ground it in an “absolute” metric. That metric should be a 1-5, where 1 is poor performance, a 3 is “meeting expectations,” and a 5 is “backing-up-the-cash-dump-truck-to-keep-them-to-stay.” My favorite line: “bad news is less anxiety-inducing than no news.”